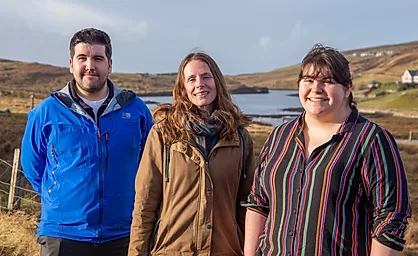 Between April 2018 and March 2020, the Community LED team delivered a plethora of positive, energy-related results for members of the two communities, in the form of home visits, training days, informative events and workshops.

Individuals across the demographic benefited from these visits and sessions, with some receiving official qualifications and training as a direct result of their involvement.  Additionally, 319 homes across the two Estates gained advice on how to make their homes more energy efficient.

Prior to the Community LED by Energy Champions project, both UOC and UOG had previously been involved in a similar development, delivered by Tighean Innse Gall.  This preceding project had provided LED lightbulbs and home energy advice to residents on the Estates. However, as a result of excellent uptake and long waiting lists for visits, clear demand for these services within the community was demonstrated.

Community consultation carried out by the Trusts only further reiterated that fuel poverty and climate change were important subjects in the lives of people on the Estates.  It was felt that the Community Led by Energy Champions project could build upon this demand, creating more home visits across the estates.  Therefore, funding was sought from the Climate Challenge Fund (CCF).  With dedicated staff employed to deliver the project in-house, and a Project Administrator joining on a part-time basis for the last 13 months of the development, the team could focus fully on delivering the project targets and goals.  Significant energy achievements have been made as a result, with lasting legacies.

Home visits carried out by the project staff focused on helping households to cut down on energy bills and make homes more efficient.  These visits have made individuals more aware of their usage and of methods to help save carbon, which will have many lasting benefits, outwith the obvious economic ones.

Individuals who participated in carbon literacy training are now able to provide advice to colleagues and family alike, enabling them to better refer others to key associated services.  And aside from these achievements, the Community LED by Energy Champions project also enabled 36 volunteers, many of them young people, to gain film-making and editing experience through creating a bilingual documentary called ‘An-Dràsta’ (Now!).

‘An-Dràsta’, which focussed on the effects of and responses to climate change in the Outer Hebrides, is the only documentary of its kind, making it a valuable resource.  It has gone on to be screened at several notable events, including the Highlands and Islands Enterprise network meeting.  In February 2020, the film won a prestigious FilmG award in the Dùthchais as Fheàrr category, which explores the connection between the Gaelic language and the environment.  This aspect of the project has created strong vocational outputs for the young people involved, with one saying: “I learnt loads of different things about filming”.  Civic engagement amongst them has also increased as a result.

Further praise has been echoed from partners involved in the overall project.  Kathleen Macdonald of Community Energy Scotland said: “Community Energy Scotland would like to highlight our support for the Community LED project and all it has achieved since it began.  It has showcased the drive and desire for community groups to take the real and serious issues being faced by individuals within their communities and try and positively impact on these”.  Rachel Elliott of Scottish Water added: “By working directly with the community, Carloway Estate Trust [were] able to give personalised advice, ensuring residents [got] the advice and water saving devices that they will get the most benefit from.”

From the results listed, it is clear that the project has delivered significant outputs for local residents, and some food for thought for wider audiences.  Economic and educational benefit surrounding carbon literacy will have a lasting impact on people’s behaviour towards their energy usage, which will only benefit future generations.