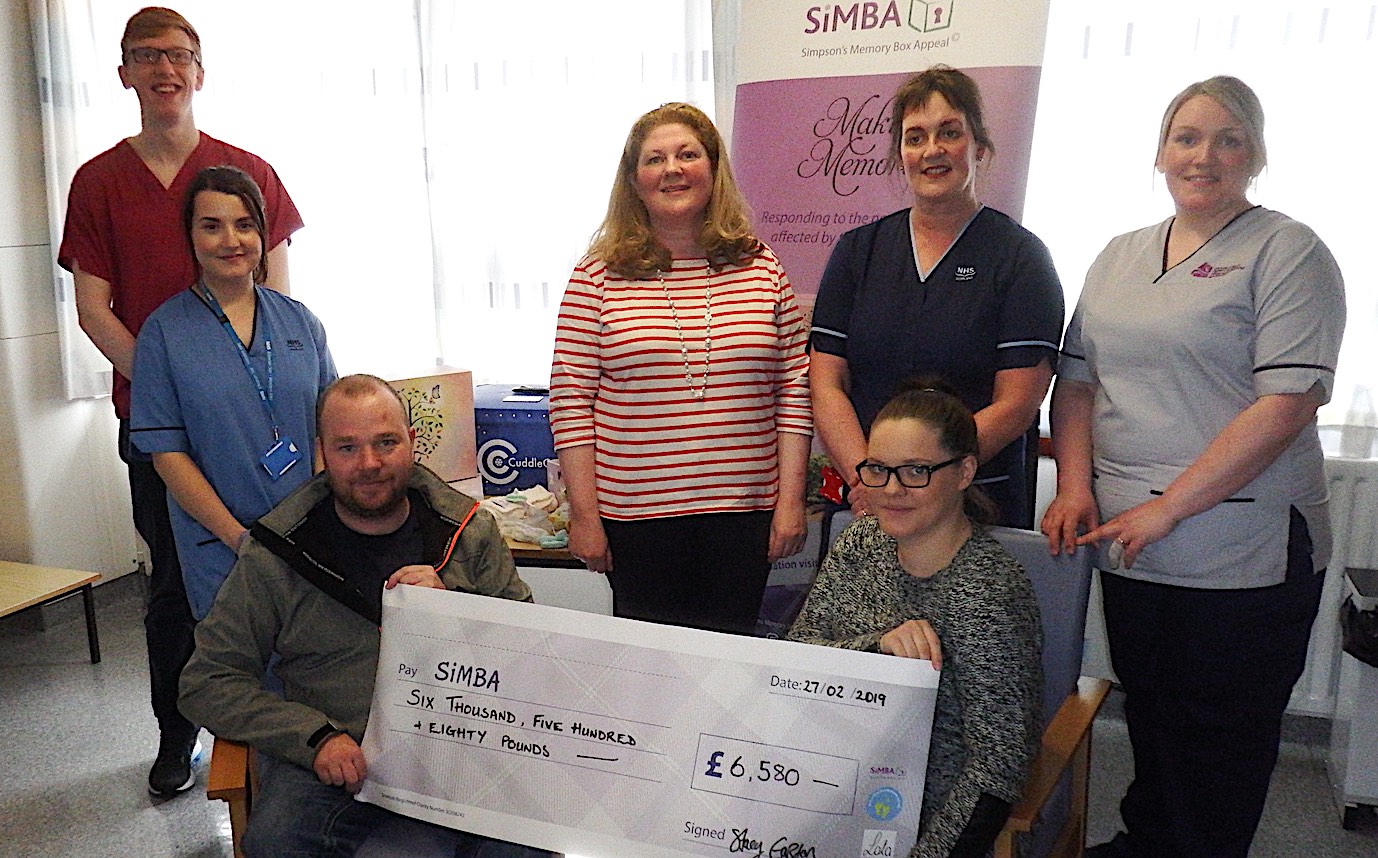 Lewis couple Stacy Easton and Murdo MacIver were delighted to present charity SiMBA with a donation cheque for £6,580, raised in memory of their son James Murdo MacIver.

SiMBA is a charity which supports the needs of those affected by the loss of a baby during pregnancy or close to the time of birth; and sadly Stacy and Murdo first became aware of SiMBA’s services following the stillbirth of baby James.

“For us, it was about more than just raising money for SiMBA, it was also about telling people about the charity, how it works and just how much it helped us,” said Murdo.

Stacy continued: “We didn’t know about SiMBA at first, but we wouldn’t have what we do now to remember James by if we hadn’t been given a SiMBA ‘Memory Box’.

“We would never have thought of taking photos or making hand and foot prints, but the Memory Box offers all that.  Now, to be able to sit and open the box, to have those keepsakes like a lock of hair, his blankets and hospital bracelet; it all helps us to remember James.”

SiMBA was established in 2005 to support anyone affected by the loss of a baby during pregnancy or shortly after birth.

The charity currently donate their ‘Memory Boxes’ to 261 hospital units across the UK and Ireland, as well as installing memorial Trees of Tranquillity, refurbishing family rooms in hospitals, and offering bereavement training – which they delivered to the team in Western Isles Hospital last year.

SiMBA also offers monthly bereavement support groups across Scotland – including one in Stornoway which meets on the first Tuesday of every month, 7-9pm, in the Caladh Inn – and 24-hour online support.

Helping SiMBA to continue this work, Stacy and Murdo set about raising funds for SiMBA through a Charity Auction Show, held in Lewis and Harris Auction Mart, Steinish, at the beginning of 2018, and a Charity Winter Ball in the Caberfeidh Hotel at the end of the year.

“The Auction was packed which was great considering it was on a freezing snowy day at the beginning of March; and we had nearly 250 people attend the Winter Ball,” said Murdo. “The support we got from the local community was brilliant.”

Stacy said: “It takes a lot of time and effort to organise these things and we’re so thankful to everyone who helped us – all of the staff at the Auction Mart and Blackhouse Bakery who catered the event as a donation. Also thanks to everyone at the Cabarfeidh Hotel for the success of the Winter Ball.

“And always, thank you to the midwives and staff at Western Isles Hospital for all their support for us with James and our pregnancy,” she added.

Sara Fitzsimmons, founder of SiMBA, said: “We are honoured to have been able to support Stacy and Murdie following the loss of their son James.

“They have been incredible fundraisers and their Winter Ball was incredibly well attended, generating not only vital funds but also awareness for SiMBA and our works. Joanne Murray Stewart, our Western Isles Support Group Facilitator, was there on the night and was delighted to be able to host an awareness stand too.”

She continued: “SiMBA are incredibly passionate about ensuring the same levels of support are available to anyone who is affected by the loss of a baby, whether in a rural community, township or city.

“We have a monthly support group in Stornoway and we will be holding our third annual Butterfly Release on August 3rd, in the Lews Castle Ballroom. The SiMBA Butterfly Release is a truly wonderful way to remember and honour our babies who are sadly no longer with us and we would encourage everyone to join us at this family friendly event.”

Full details about SiMBA and the services offered can be found online at: www.simbacharity.org.uk