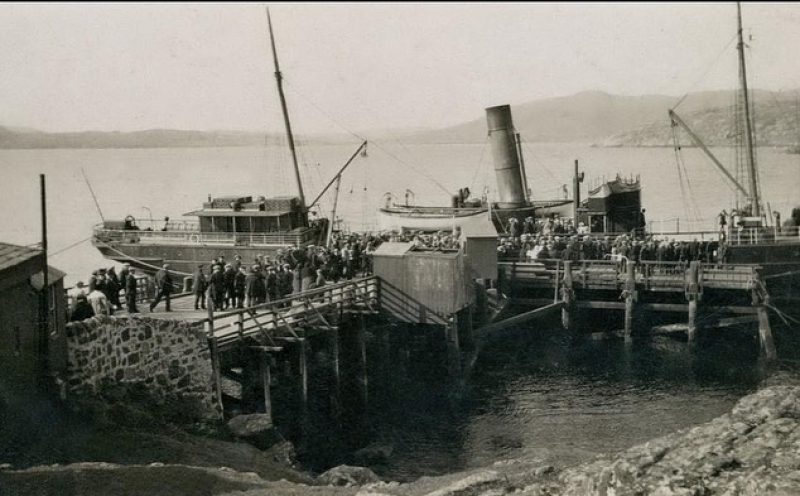 On October 30, welovestornoway.com carried an article about how, as the world once again staggers under the impact of war and economic crises, next year marks a major anniversary of how the people of the Western Isles tried to cope with a similar situation in the 1920s.

And above the article we carried the photograph seen above.

Within a few hours our expert readers had pointed out that vessel in the photograph - although in outline quite similar to the Marloch as our caption stated - could not be that vessel as the Marloch was 520ft in length x 60.4ft in beam and simply could not have come alongside in Castlebay, then or now. So we unpublished the article for further considerations

The Marloch (originally the Victorian) was the first triple screw North Atlantic liner with 3 steam turbines delivering 15 000 shaft horsepower, giving herself and her identical sister ship a speed of 18 knots. They had three decks and passenger accommodation for 346 passengers first class, 286 second class and 1000 passengers in steerage.

There was simply no way that she – or the Metagama – could have come alongside any Island port.

But April 2023 does mark the centenary of the SS Marloch, leaving Lochboisdale and Castlebay with hundreds of islanders bound for a new life in Canada. The passengers were mainly from Eriskay, Barra, South Uist and Benbecula.

So if she never came along side, how did they get on board? Instead what were referred to as tenders ferried the migrants across to the waiting liners. But the tenders were not the small boats seen nowadays attending large visiting vessels - they were ships from the Macbrayne fleet.

With the assistance of Stornoway Historical Society, we conclude the vessel in the photograph was actually Macbrayne's SS Hebrides. Some biographical notes on a Finlay Buchanan who emigrated from Barra to Canada in 1923. name the SS Hebrides as the transfer vessel to the Marloch. The emigration database of Aberdeen University contains lots of details about Finlay who was born in 1870.  He married Catherine McDougall at Castlebay in 1908 and emigrated to Canada with assistance from Scottish Immigrant Aid Society.  Finlay, wife Kate, and their five children (Catherine, Rod, Don, John and Alex), sailed initially aboard the SS Hebrides. Approximately 1 mile offshore, the family transferred from SS Hebrides to SS Marloch, which would carry them across the Atlantic arriving at Saint John, New Brunswick on April 19 1923.

As reported in our earlier report, Comann Eachdraidh Eirisgeidh is now appealing for information, photographs, and family stories about those who emigrated, the families they left behind, and those who returned.

Although much is reported of the mass emigration, far less is catalogued of the fate of those many who returned as they came back to the Islands one by one, or in small groups.

In an online statement, the historical society comments: “You can just imagine the buzz of excitement of the promise of a better life mixed in with the sadness of leaving loved ones behind, not knowing what is ahead of you and if you will ever have the opportunity to return home again.”

The Eriskay Historical Society are working in conjunction with Kildonan Museum and Comann Eachdraidh Uibhist a’ Deas to collect and showcase this information throughout the anniversary year.

People at home and abroad with information or wishing to be involved in the centenary are asked to email This email address is being protected from spambots. You need JavaScript enabled to view it..

The Marloch was launched in 1904 as the RMS Victorian for the Allan Line and was the world's first turbine-powered ocean liner. She was built in Belfast. She had a sister ship, Virginian, which was built in Scotland and launched four months later. In 1917, she joined the Canadian Pacific line. Having served as a troopship to India, in 1922 she was converted to oil fuel by Fairfield Co Ltd, Glasgow  In 1926, she collided with the SS Whimbrel, and was towed to Southampton.  She was scrapped at Pembroke Dock in West Wales in 1929.

We apologise for our earlier mix-up and are happy to clarify the situation for the benefit of history.

Hundreds of islanders from Lewis and Harris set sail in May 1923 from Stornoway on board the SS Metagama.