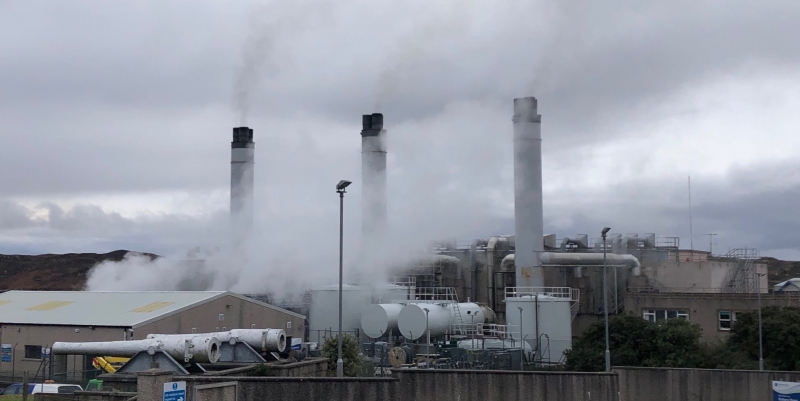 Accusations of ‘old slow’ generating machinery, and power management who think too slowly, made by Point and Sandwick Trust (PST), have sparked an electrifying response from Scottish and Southern Electricity Networks (SSEN).

PST yesterday (Wednesday 20 January) issued a newsletter update, in which they summarised the issues affecting them after the power cable between Lewis and the mainland failed.

All the islands’ wind-power generators have been affected to a greater or lesser extent by the loss of revenue from the energy they generate.

In their newsletter yesterday, PST laid blame for the physical and social disruption at the door of SSEN.

They say that, while accepting that people have differing opinions on the best solutions, the decision they made on a cable replacement announced in December (http://news.ssen.co.uk/news/all-articles/2020/december/skye-harris-subsea-cable-replacement/) was the best solution to solve the cable problem without exposing customers to ‘significant risk’.

Yesterday’s summary by PST said: “When SSE's cable from Skye connecting Lewis to the mainland grid failed in October, SSE switched off all the wind turbines on the islands and supplied all the local electricity using the old diesel generators at Power Station at Battery Point outside Stornoway.

“This was not because of any fault in the turbines.  It was, instead, because the machines at Battery Point are old, slow and unable to work with the power our turbines produce.

“As a result our income was cut off and the impact was instant and significant.  A number of local charities were badly hit and projects were halted.

“SSE say that the earliest they can repair the cable is August this year.  Together with the other community energy companies, we have called for SSE to upgrade the link with Skye, either by putting in a bigger cable to allow more community wind farms to be developed, or else by installing two cables of the same size that broke so that the system is more resilient in the future.

“We will continue to lobby SSE to use this catastrophic outage to 'build back better' and to ensure the islands are served in a way that can reduce our reliance on dirty diesel, get our turbines spinning again and create more capacity on the grid for new community turbines.

“For us, it's a no-brainer.  For the powers-that-be, however, the message seems to be taking a long time to sink home.”

In an official response to the published newsletter, a spokesperson for SSEN said yesterday (Wednesday): ““SSEN Distribution’s core priority is to ensure a safe, secure and reliable supply of electricity to the homes, businesses and network users it serves.

“To ensure system stability and protect customer supplies, Battery Point and Arnish Power stations are currently playing a critical role to keep the power flowing in Lewis and Harris, providing the baseload generation required to prevent any further interruption to supplies.

“We fully recognise the impact of the cable fault to local renewable generators and the wider community and, where possible, have looked to mitigate these impacts.

“As a gesture of goodwill, we made a £300,000 contribution to an emergency fund, alongside Comhairle nan Eilean Siar, to support community groups and charities delivering an essential service on the islands.

“Since the cable fault occurred, we have released additional capacity to wind generators to support on-island demand and they are currently producing 800KW of energy to customers in Lewis and Harris.

“We continue to explore innovation options and solutions to maximise the amount of renewable generation that can run, such as battery storage solutions and associated services, to further increase generation export until the network is restored to normal operation.

“We recognise from our engagement with the community that there are a range of views about the optimum solution, each with its own trade-offs.

“In exploring options, it became clear that the conditions and timescales related to a larger solution posed a number of challenges which could not be reconciled without leaving customers and network users exposed to significant risk.

“We are committed to exploring options to improve the resilience of the distribution connection to the islands and associated arrangements and would welcome any views that may inform our investment plans for the RIIO-ED2 price control period which starts in 2023.”