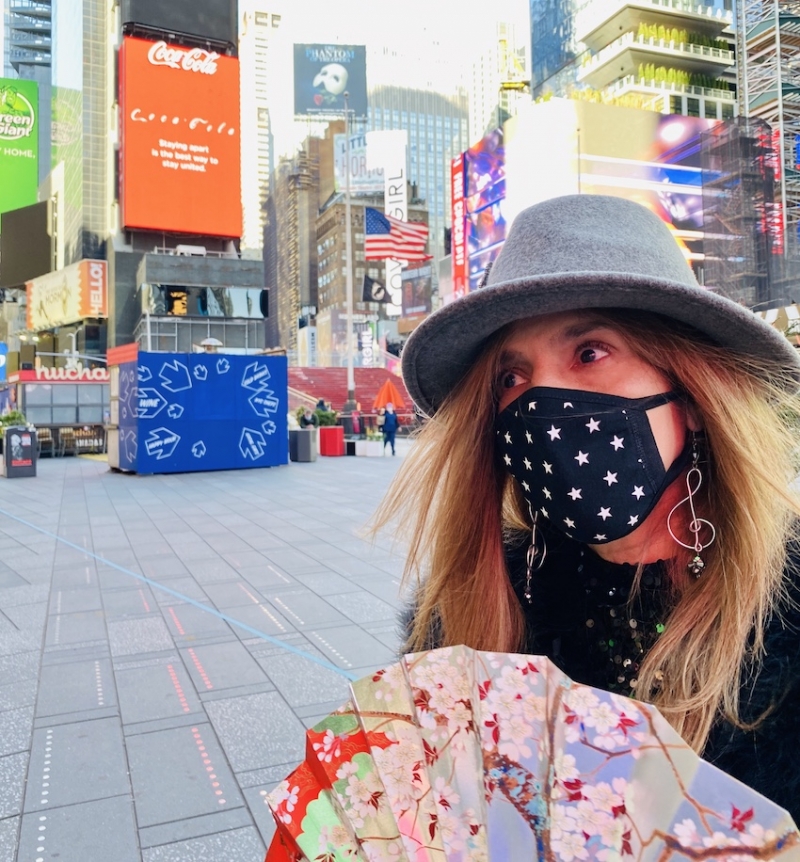 Masks for all in New York now

Internationally-renowned jazz singer and former Grammy voting member, Kathryn Farmer and her fellow New Yorkers are not feeling any safer...even though the COVID-19 death toll in the city is beginning to decrease.

From a high of 800 deaths per day in early April, during the peak, the daily death rate is now around 550. Still tragic and still shocking for the eight million people that call New York home.

Recently returned from an overseas engagement in SE Asia that was cut short, Kathryn has been back in the Big Apple for a month.  But she is expressing alarm at the lack of testing and contact tracing, the norm in the part of the world she had just left.

Recalling her return to New York, Kathryn told welovestornoway.com: “New York City and all the states were way behind in testing, and so far there is no contact tracing as in Asia.

“It’s hard to know the real number of infections and deaths that are Covid19-related without the test. The Center for Disease Control issued faulty tests and wasted nearly around six weeks trying to release a multi SARS1, MERS and SARS-COV2 test all in one that didn’t work correctly.

“It was a huge waste of time. The WHO did have a test to use back then but the CDC refused it, as I understand, and all this tinkering around with different tests wasted so much time. With this virus, you cannot waste one day; each day you lose is days of momentum gained by this virus that’s more like a fierce predator than a virus.”

Despite these frustrations, Kathryn, like many around the globe who watch his compelling press briefings, applauds the efforts of New York governor, Andrew Cuomo. 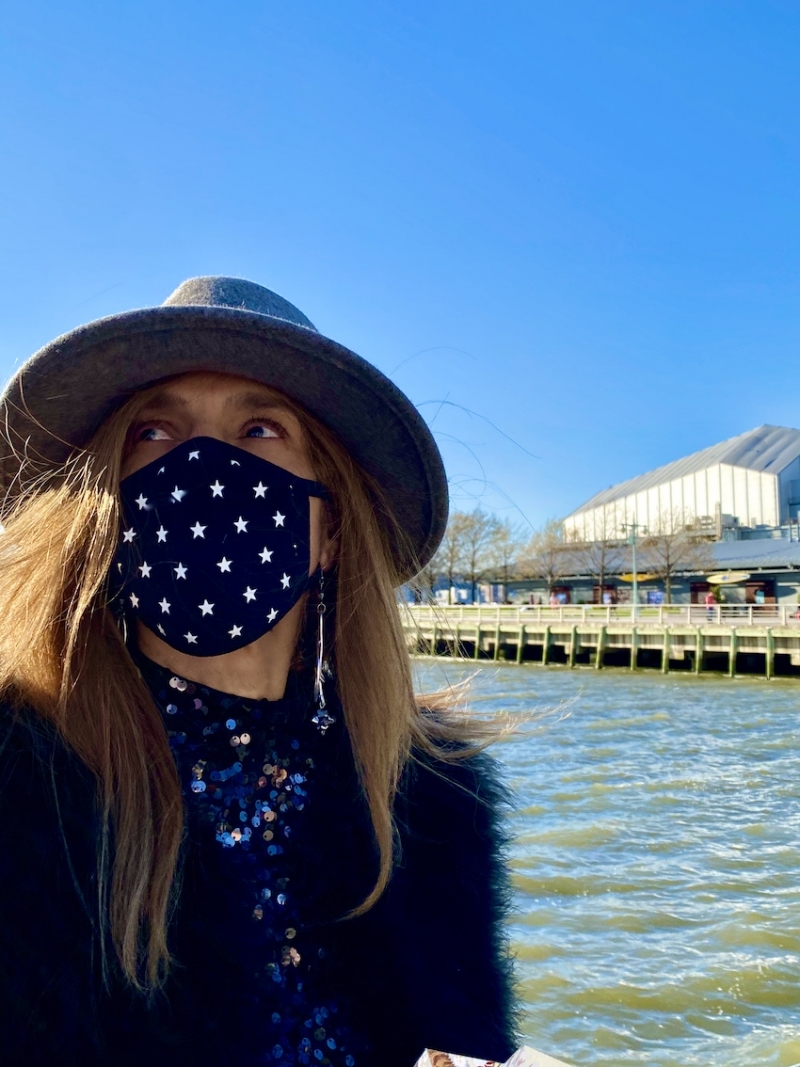 “Andrew Cuomo is to me the best ever!” says Kathryn. “He may have stepped up a little late, but now that he has, he’s taking full control of the situation! Trump has issues with him lately, but what else is new? Trump is too much about the politics and not enough about USA citizens safety.

“Governor Andrew Cuomo has shown real leadership qualities. He is doing the best to let New Yorkers know he’s trying to balance our health and our dwindling economy. But, first and foremost, he makes sure safety is at the top of the list.”

Kathyrn, too, shares his worries about the economy. As a recording artist and international performer, she has taken a huge hit financially. Like other performing artist professionals in this cosmopolitan city, Kathryn is deeply affected, economically and emotionally, by the shock wave. This shock wave has all the city’s clubs, all Broadway shows, restaurants, and the venues Kathryn performed at weekly between international gigs.

Only musicians and singers associated with a university or conservatory are currently working. And they are doing so online from home with students they already in place with their school. Music teachers who are privately tutoring their students have felt losses as people have substantially less disposable income.  Inevitably it’s the singing, piano or saxophone lessons that get trimmed first.

Reveals Kathryn: “I am taking a huge, huge hit. I had just come off two months, last December 2019 and January 2020, on the Symphony Of The Seas Royal Caribbean Cruise which is the largest cruise ship in the world!

“I took my next gig back at the Sofitel Metropole in Vietnam, which I worked previously three times before I planned to return to the Caribbean ship itinerary.  I wanted to go back to Asia. I knew it would be fragile this time because of the virus, but I accepted the residency because I really wanted to return and see my old friends, sing with my old bandmates, and meet new people there again.

“Afterwards, I was booked to rejoin the Royal Caribbean Cruise on the Oasis of the Seas, the second-largest ship in the fleet. I was due to rejoin on May 24 for the summer season, but of course, all ships are now brought in to dock. It’s tragic; I am not sure when any cruise ships can start sailing again. I mean, it’s not realistic to think they could return this year.”

In the meantime, she is keeping a close and hopeful eye on whether work will reopen in the late fall in Asia.

Trying to remain upbeat, Kathryn comments: “I would like to start back, of course, and present my shows again. I’m trying to be optimistic, but in reality, I am not sure when performing artists can safely return to work. Our work requires being in close contact with the public; in other words, being in people clusters, our audience, it’s the nature of our business, our performance.”

New York, the city that never sleeps, is eerily quiet, the now deserted city streets unnerving for New Yorkers accustomed to 24-hour hustle and bustle. Kathryn’s neighbourhood, the commercial Times Square district, is one of the safer areas of the city.

It’s a neighbourhood she’s resided in since 1985 and is where Kathryn always felt comfortable using the subways in the wee small hours after work to return home.

That secure feeling has vanished Kathryn fears: “Now it’s gotten quite unsafe after dark. The once most crowded streets in midtown, portrayed in so many silver screen movies, are now desolate which is so weird. Times Square, which is why NYC is nicknamed ‘the city that never sleeps’, is now the quietest corner of the world. There are no tourists, no Broadway, no restaurants no people, no nothing, It feels like a bad science fiction movie I want to turn off. But it’s definitely not safe anymore after dark.”

If she goes out, it must be before evening. Her kid heard gunshots two nights ago, and she woke her up as she was so scared.

Reinforcing this sense of otherworldliness has been the strict rules applied within Kathryn’s apartment complex.

It seems paradoxical, perhaps, that the more security measures there are, the less safe New Yorkers seem to feel. 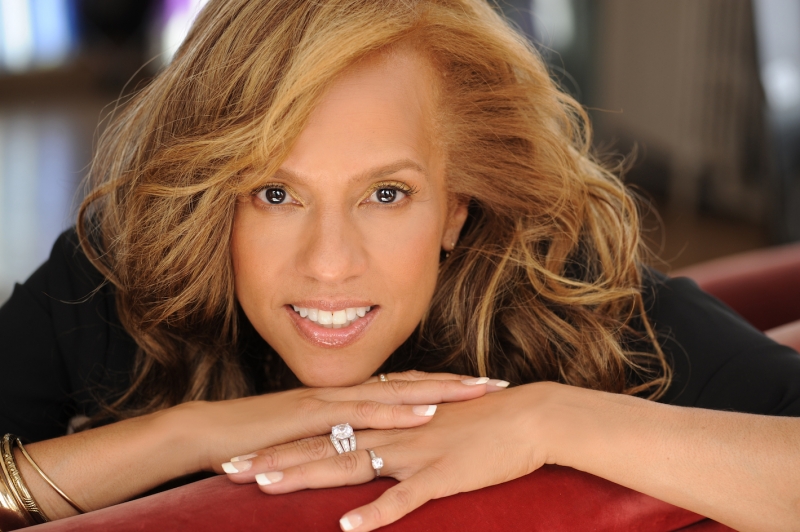 Kathryn is an acclaimed jazz and R&B vocalist who has enjoyed a stellar reputation on the world jazz scene. Her gifted four-octave range vocals have captivated audiences in over 16 countries, from Tokyo to Berlin, Casablanca, Italy, Moscow, and the Montreux Jazz Festival in Switzerland.

Thanks to her father’s love of jazz and blues, Kathryn was introduced to the legendary recording artist Laverne Baker. Kathryn then became a fixture backstage during the singer’s various stints at the famed Apollo Theatre.

Kathryn remarks: “I saw so many shows there from James Brown, The O’Jays, The Temptations, The Supremes, The Jackson Five, and the list goes on. Jazz was ‘smacking me in the face’ since I was a kid. It was my backyard music. It was in my bones; I didn’t have to find it.”

After graduating from New England Conservatory of Music (Boston), the New York City jazz scene was beckoning her return to her roots. The jazz community quickly embraced Kathryn who soon found herself sharing the stage with a roll call of illustrious jazz greats.

Kathryn then embarked on an extensive global touring career that saw her performing with a legion of jazz luminaries.

The mid-2000s was a real turning point for Kathryn when she was invited to record with the Grammy award-winning group, The Klezmatics in Berlin at the World Music Festival. The CD entitled “Brother Moses Smote The Water’ featured Kathryn on vocals and Hammond B3 organ.

Since mid-2009 to the present Kathryn has been the resident diva for five and six-star deluxe hotel properties across the globe, as well as major cruise ship lines. Her debut CD, Moondance was released to critical acclaim in 2013.