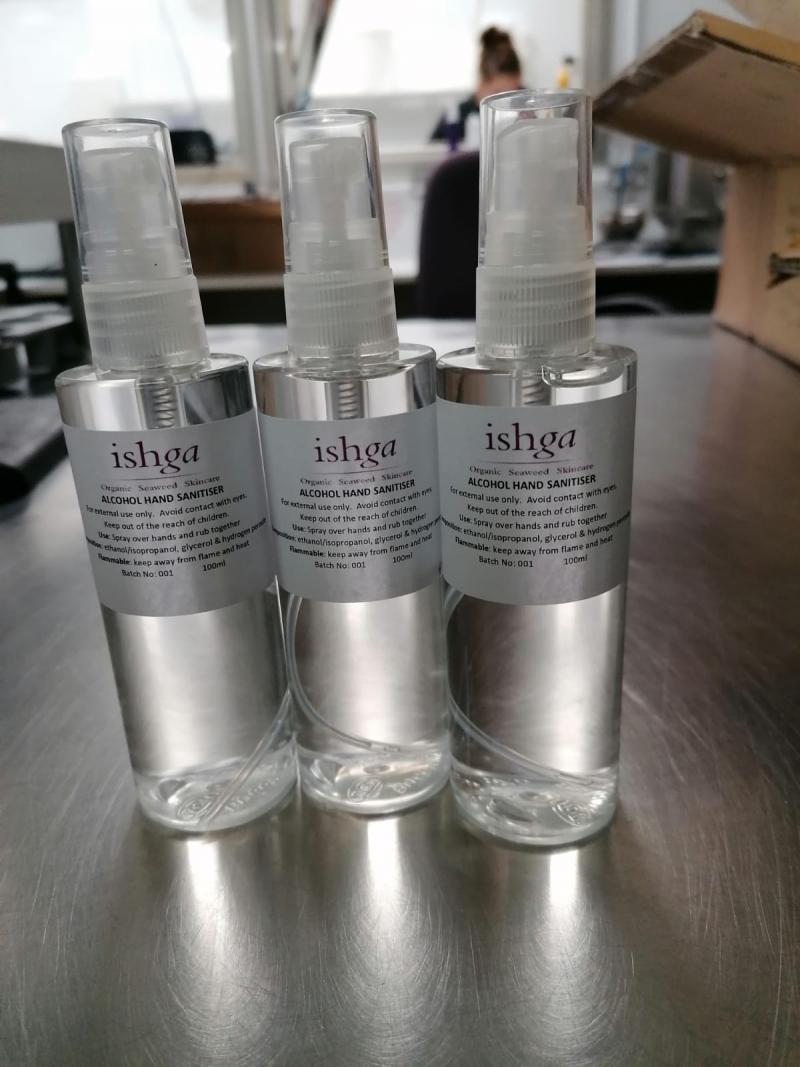 Since the onset of the Coronavirus pandemic, supplies of hygiene commodities like cleaning fluid, disposable cloths and tissue paper have been flying off shop shelves across the Western Isles.

But island companies have stepped up to fix the chronic shortage of one virus-busting essential with a true community effort, using initiative, ingredients, packaging and printing that are all locally supplied.

The result is that the Western Isles have become virtually self-sufficient in one of the most important protective products for front line staff and home-workers – hand sanitiser.

North Uist Distillery are keeping their Downpour gin in production, while at the same time partners Jonny Ingledew and Kate Macdonald are turning out hundreds of litres of hand sanitiser.

Jonny said: “There was a story in the news just as the epidemic started about a Bristol distillery that was producing hand sanitiser, and we started to get enquiries locally to see whether we were going to do some.

“There was an obvious local problem in that no-one could get access to this vital product and, as we have the ingredients, we felt an obligation to make it. We had the alcohol and we had hydrogen peroxide and glycerine too. The bottles were ex-stock from another company and they also helped us to get labels printed.”

The result was 1,000 bottles given away to front-line staff including care workers, posties, delivery drivers and GPs surgeries across Uist and Barra.

Island customers are the absolute priority – despite enquiries coming from posties in Devon and NHS workers in Newcastle. Jonny is adamant: “We don’t want to get into the sanitiser game, we just want to make sure people here have access to it while they badly need it.” 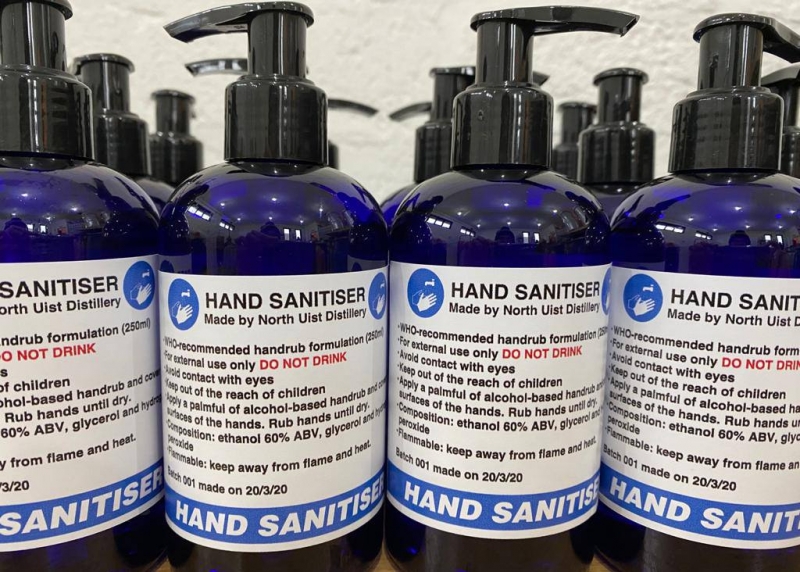 Another batch of bottles is due in stock this week and Jonny – who is working alone at the distillery now – is also filling 10 and 20-litre jerry-cans for shops throughout the Uists. That cuts down on the use of plastic containers, which are anyway in short supply on the wholesale market.

Jonny said: “People can bring along their own bottles – we suggest an empty, clean handwash container – and get them filled at Lochmaddy shop, Berneray shop and bistro, Lovats supermarket, Daliburgh Co-op, Bayhead shop, Eriskay shop and What’s Happening at Sollas.

“We’ve donated most of the bottles but we ask for a donation/payment of £2.50 for a 250ml bottle to cover costs. Companies of key workers that were able to purchase them did so and we really appreciate that as it allows us to keep producing and donating where it’s needed.”

North Uist distillery has joined a list of producers who are making sure the whole of the Western Isles can get access to sanitiser, passing customers between them to ensure the islands are covered from North Lewis to Vatersay.

Isle of Barra Distillers are moving into full production this week and yesterday (Sunday 12 April) they announced that their first batch is already out to key workers including staff at St Brendan’s Hospital, Castlebay Post Office and other frontline businesses.

They said: “We will be producing as much as we can as fast as we can. We will be doing this free of charge and all costs will be covered by the Isle of Barra Distillers. If you are a key worker on the Isle of Barra then please get in touch and we will see what we can do to make sure you have a supply.” 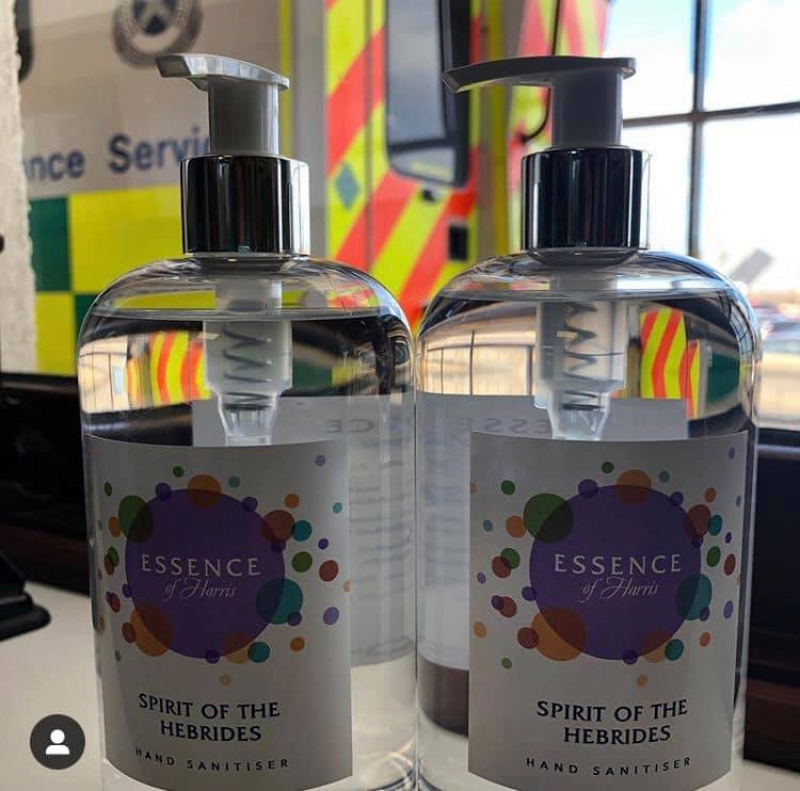 Meanwhile in Harris, two companies are working together to bring a sanitiser to those who need it most. Essence of Harris has joined forces with the Isle of Harris Distillery and is now in their third week of production of a hand sanitiser they’ve called ‘Spirit of the Hebrides’.

It’s been supplied free of charge to Western Isles Hospital and emergency workers like ambulance crews and police officers, as well as being personally delivered to the homes of those caring for at-risk individuals at home.

Demand has been so high that a 250ml sanitiser gel was put up for sale on the Essence of Harris website – where it sold out almost immediately. A company spokesman said it was hoped that the product would be back online soon, once raw ingredients had arrived.

The Harris duo have been joined in Lewis by the luxury salon cosmetics brand Ishga, who have been working quickly to respond to gear up to the needs the island community.

Providing some of the base ingredients, Ishga joined Essence of Harris and the Isle of Harris Distillery to create a sanitiser for frontline service staff while their hand cream is also being supplied to NHS Western Isles Hospital and to local hospices and businesses in Stornoway.

Ishga director Malcolm Macrae said: “We’ve been supplying both the sanitiser and the hand cream free of charge to people like home carers, supermarket staff and hospital workers. A lot of them have been telling us that their hands are in bits after all the hand-washing and we wanted to give them something to help their skin recover as well as to protect them from infection.

“The recipe we have been using for the sanitiser is the one supplied by the World Health Organisation and it has been checked and approved with trading standards at the Comhairle.

“The communities here in the Outer Hebrides have been very supportive of our business over the years so it’s great to be able to use our skills and experience in order to give something back. It’s also great to be able to work alongside other local businesses at a time like this in order to deliver this very important service to the local community.”

Pictures show hand sanitiser supplies made in Barra, North Uist, Harris and Lewis, much of which is going out free of charge to island frontline workers.